This bank holiday weekend I listened to a couple of shows on BBC Radio 4 that shed light on the work I’m doing around the best use of video drama to transform organisational culture.

Misbehaviour is part of the job

The first was an episode from May this year of that marvellous show Thinking Allowed, in which Laurie Taylor discusses the latest sociological research.  In this episode, about workplace misbehaviour, he begins by recounting his early experience as a commissionaire for a West-End Cinema. The job was to stand outside the cinema in a gold uniform, with a peaked cap, trying to look authoritative.  But slowly, he learnt from his colleague Dave that there was more to the job.  Helping cinema-goers to park their cars, maybe actually parking them.  Buying tickets and illicitly selling them to punters who wanted to jump the long queue.  ‘It’s all part of the job’, Dave reassured him.

How do we address such culturally sanctioned activities that are not in line with best practice?  In such situations people know what they should do, so there’s always a moment of choice.  And choices are the very stuff of drama.  This is why this type of sensitive cultural problem is so interesting to me.

Violence in the kitchen

Laurie’s Taylor’s guest, Rebecca Scott, Senior Lecturer in Marketing at Cardiff University, spoke of her team’s research into organisational misbehaviour in elite kitchens.  Turns out these workplaces are very high stress, and common misbehaviours extend to some nasty harassment and violence.  There are, after all, tools of violence to hand.  It seems that the culture in these kitchens is influenced by media portrayals of top chefs as, essentially, demanding thugs who shout a lot.

The impact of video in workplace culture

“Reality” TV, of course, is not reality at all, but rather a carefully constructed melodrama, designed for maximum thrills.  If we take the same kind of subject matter and we are honest and serious in how we explore it, we can produce powerful drama that brings difficult issues into the open. A problem becomes objective and hypothetical but, nevertheless, bursting with emotion. When telling the tale of someone driven to violence by the pressures of work, we may not resolve the story, but leave it hanging to stimulate discussion.  If you tell half a story, the audience wants to complete it for you.  If you get this right, you can release the gossip genie.

Is gossip in the workplace bad?

Gossip?  Isn’t that a bit negative? This was the subject of Woman’s Hour on Radio 4 on Monday – which interviewed academics, gossip columnists and podcasters – investigating why gossip, with its traditionally feminine associations, remains a pejorative term. One hypothesis examined was that of evolutionary psychologist Robin Dunbar. At some point in our evolutionary history, we traded the intimacy of grooming for the efficiency of gossip as a tool of social bonding. This development allowed our ancestors to live in larger groups. In essence, humans evolved language and large neocortices to be able to talk about each other. Gossip weaves our social fabric. And prehistoric social structures ensured that women were the prime motor of this development.

Nowadays, says Dr Kathryn Waddington, author of Gossip, Organization and Work: A Research Overview, men gossip just as much as women, although they are more likely to give it a more dignified label such as “networking”. In further evidence we learned from its founder, Camilla Wright, that Popbitch – a weekly UK-based celebrity and pop music newsletter – has more male than female readers.  So, gossip may still be perceived as feminine, but we all enjoy it.

Video drama is the starting point of a campaign

Back in the corporate world, a carefully designed campaign can take a tricky cultural issue, turn it into a video drama, share it with the people affected by the issue.  Drama doesn’t tell people what to do, but it can stimulate them to think deeply about a problem.  If you can create a safe space around that experience, discussion and sometimes solutions can arise.  Further interventions, that add up to a campaign, such as curated social media workshops, questionnaires, even Gogglebox-style videos, serve to keep the issue alive and to stimulate further productive discussion (gossip?) that can spread spontaneously.  It all hinges on being brave enough to discuss the grey areas of our working lives.  The braver you are the more gossip can work in your favour.

Stay tuned for more content about video drama’s use in changing organisational culture. 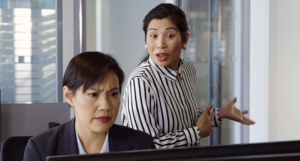 In most large organisations there is a problem that seem impervious to everything you throw at it. Training and mandating, workshops and awareness campaigns don’t make a dent. These problems usually boil down to one thing – behaviour. 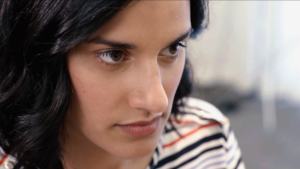 Drama is an Adult Medium

I’ve been reflecting upon how drama is the most adult of learning materials.  No, not “adult” in that sense, but a medium that only succeeds when we treat our learners as adults and address them as equals.